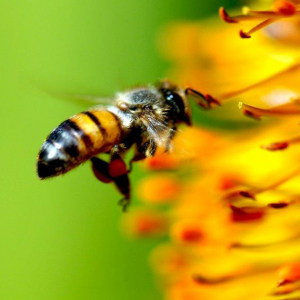 Honey bees are an herbivorous member of the insect order hymenoptera. They are found in all except the coldest climates on Earth, with different sub-species occupying various continents. Though not native to North America, these insects escaped captivity found their way all across the country after being imported by the first European settlers as domesticated bugs. They live in large colonies, or swarms, and form highly organized societies with a caste system consisting of the queen that rules over the colony, the female workers of various occupations who care for the hive, and the male drones. The queen lays eggs to keep the hive populated and uses pheromones to send signals to the hive showing them how to behave. The workers are nurses, builders, and protectors of the hive. While keeping watch over the hive, workers use their barbed stings to ward off intruders.

These bees collect pollen while foraging for food from many plants and are the chief insect pollinators for most commercial crops in the United States. Nectar that is collected is then taken back to the hive and converted to honey, which feeds the colony and helps sustain the bees over the cooler months when foraging becomes impossible. Pollen is also collected and carried to the hive and serves as a protein source for the swarm.

Honey Bees that live in the wild tend to build their perennial (meaning it is maintained year after year) hives in hollow trees, though they have been known to find their way into buildings, making nests in confined places like inside walls or in attics. When bees find their way into homes, businesses, or other highly populated areas, bee removal specialists should be called to ensure the safety of everyone involved.

Africanized bees, or European bees that have been crossbred with more aggressive African species, have been found in the U.S., and many places like Los Angeles are said to have been totally colonized by the ‘killer bees’. These Africanized bees are often responsible for bee attacks that end with death or serious injury. 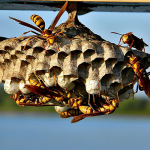 Wasps are a member of the insect order hymenoptera, suborder apocrita, and make up every member of the suborder that isn’t classified as a bee or ant. There are an estimated 100,000 species of this insect described in the world, though they can primarily be categorized as social or solitary. Wasps yellow jackets are present on every continent except Antarctica. These flying insects known for their fierce nature are omnivorous. They can be distinguished from bees by their narrow waist and teardrop shaped body.
Species range in size from .2 millimeters to 5 inches in length. Females of this suborder may possess a stiff ovipositor that often develops into a stinger.

Many of these insects are parasitic, meaning they rely on other insects as a host. These parasitoids are incredibly specific, with most varieties only using one variety of insect as hosts. Because they are parasitic, they play a huge role in controlling various insect populations across the world.

Most species are classified as solitary, meaning they do not tend to form colonies and share a division of labor or caste system. Once the solitary species have mated, the female typically goes to prepare a place for her pupae to grow and search for food for herself and her own offspring. The nesting habits of solitary species are very diverse, and the may dig holes in the ground, build a stand alone nest, share a nest with a small group that doesn’t interact beyond shared space, or use an insect host as a nursery. Since solitary species don’t possess a hive mentality, which causes social species to swarm, they aren’t typically seen as a major threat to humans, though some varieties are so venomous that they can be dangerous with just one sting.

Social wasps live in large groups. The group builds a communal nest, usually with many individual cells, out of fibrous materials with additives like mud, resin, and secretions from the insects themselves to hold it all together. They construct their nests in a variety of places, depending on species, such as on branches, beneath leaves, in wall cavities, and even underground. Since they protect their nests fiercely by swarming perceived invaders and stinging, these insects can become a problem when they encroach on human dwellings or places where people frequent, like parks. 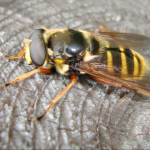 The yellow jacket is a type of wasp, though it is often mistakenly called a bee as it tends to be less slim than most varieties of wasps. Most yellow jacket workers are about a half of an inch long and are black and yellow. They always have white or yellow on their face. They have strong pincers, or mandibles, that aid in nest making and chewing protein sources for the larvae. As with other wasps, yellow jackets are omnivorous.

Yellow jackets nest in trees, bushes, or any protected area they can find, such as inside buildings. Colonies can grow to enormous numbers. Nests last only one year, with future queens fertilized and sent out to seek shelter over the winter to repopulate a new nest site in the spring.

Yellow jackets can sting repeatedly. They target encroachers of their territory and pursue them, stinging over and over. Their stings are very painful. Since they frequently nest in areas inhabited by humans and are very aggressive, they are truly a pest. 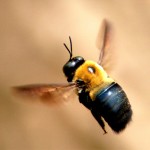 Carpenter bees are large bees that are typically mostly black with some yellow. They are usually solitary, though some species live in small familial social groups. They are found all across the world. A Los Angeles Times article described them as a black thing the size of a golf ball. They are herbivorous and eat nectar and pollen.

They make their nests by tunneling through wood, vibrating their bodies and sawing with their mandibles. Nests usually have only one entrance on the underside of a wooden object with tunnels branching off. Though carpenter bees don’t eat wood, they sometimes reuse it to construct partitions between the individual nest cells. The tunnels act as both nursery and pantry.

Though not aggressive and for the most part unable to sting, these bees can pose an issue to humans because of the damage they cause while nesting in man-made dwellings. 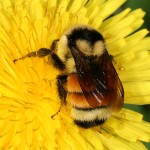 Found typically in higher latitudes or altitudes, bumble bees are a social insect. They build small colonies underground and are ruled by one queen.

Covered in soft, fuzzy hair, they are rather large. They eat nectar and feed their young pollen.

Bumble bees are an important part of agricultural pollination. Queen and worker bees of this variety have the ability to sting, though they aren’t particularly aggressive. 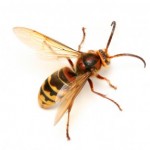 Hornets are a variety of social wasp, distinguished only by the larger girth of the vertex, or the area on the head behind the eyes. They are found mainly in the Northern hemisphere. They build nests in dark, hollow spaces like tree trunks. They eat sugary foods like nectar and sap, though they kill insects with their powerful venom to chew up and feed to their larvae.

Hornets are more venomous than most wasps and can sting multiple times, making their stings exceptionally dangerous to humans. When a hornet stings or dies, it secretes attack pheromones that mobilize the colony into action to eliminate the threat.